To celebrate #worlddiabetesday I’ve written an article to provide hope to anyone who might have been recently diagnosed.

Being told that your blood sugars are too high is about as sobering as missing the last bus after a New Year’s party.  I know; it happened to me.  But the good news is that diabetes type 2 is often quite easy to repair.  It changed my life – but in a good way.  It led, for me, to learning everything there is to know about how to manage diabetes type 2 and eventually to my return to university and retraining as a clinical nutritionist. My diabetes has been in remission now for several years and I’m so much healthier than I used to be.  All down to losing weight and eating a healthy diet.  I want to share the good news. Diabetes type 2 can be put into remission – this article tells you how ground-breaking research has led the way and buries the myth that sugar is the culprit. High blood sugar levels are a symptom. It is being overweight that has to be resolved.

WHAT IS DIABETES TYPE 2?

Diabetes is the term used for a cluster of diseases defined by a lack of insulin in the body.  Some people are born with faulty insulin secretion.  Some people, like me develop it, as they age.  In some the islets of Langerhans, the specialist cells in the pancreas that secrete insulin, fail altogether.  In others they simply get sluggish and that is diabetes type 2.  It is preceded by something called pre-diabetes – as the cells start to fail.

The pancreas is a small and delicate organ right in the centre of your tummy, below the stomach [i].  Because of its location it is very susceptible to inundation from visceral (tummy) fat.

Insulin is the principle metabolic hormone that helps us retain a balance of glucose in our blood.  We need glucose to be released 24/7.  Glucose is the fuel that the body uses.  Some organs like the heart can use little else.  Other organs can divert energy from fat and muscle to ‘make-do’ if there isn’t enough sugar around.  The body’s ability to switch from burning glucose (from food) to fat (from adipose tissue) is a measure of our metabolic heath.

Metabolic disease, a catch-all term for these types of illnesses, is identified when the sugars circulating in the blood cannot disperse.  The excess builds up and flows back out through the blood stream and is flushed away into the bladder and gut.  The Greeks first recognised the disease. The term diabetes mellitus is derived from the Greek word for a siphon and the Latin word mellitus meaning honeyed or sweet. This is because in the days before chemical assaying the disease was detected by the sweet taste of both blood and urine.

WHY IS DIABETES SERIOUS?

Because the lack of insulin means that glucose is not being correctly flushed through the body serious symptoms can develop.  People often first detect diabetes because they get a tingling or itching in their hands and feet.  This is peripheral neuropathy, and occurs because the nerve endings far from the heart are being damaged by excess glucose.   Eventually diabetes and the poor circulation it brings can lead to blood vessel damage, especially in the feet and lower limbs.  Blood vessel damage and the resulting inability to feel pain (caused by nerve damage) can escalate a minor injury into a major problem.  The most serious consequence of uncontrolled diabetes is amputation.   New analysis from Diabetes UK has shown that there were 26,378 lower limb amputations related to diabetes in England from 2014 to 2017, an increase of 19.4% from 2010-2013[ii].

The eyes are also very susceptible to changes in blood sugar levels, inducing several conditions such as glaucoma or cataract.  Diabetic glaucoma can increase the pressure within the eye, damaging and distorting the optic nerve and changing the vision. People with diabetes are 10 to 20 times more likely to go blind than people without it[iii].

WHAT ARE THE SYMPTOMS?

Symptoms of diabetes include unexplained tingling or itching, fatigue, eyesight changes, an increase in urinary tract infections and thirst.  Diabetics require more and more liquid to help flush away the excess glucose. Unfortunately, all these symptoms can mean many other things, or simply be dismissed as part of ageing.

High, or low blood sugar on a particular day, at a particular time, are not conclusive.  The HbA1c blood test provides a measure of your blood sugar level averages over the last month or so.  It is the gold standard.

HOW DO I GET CHECKED?

he NHS Health Check programme invites everyone between the ages of 40-74 for a health check every 5 years.  You should receive a letter, but you can enquire at your GP if you think you haven’t received an invitation[iv] . If you don’t qualify because you have a pre-existing condition, you can visit the GP at any time and after explaining your symptoms, they should give you a urine test, followed by a blood test.

If you are diagnosed as diabetic or pre-diabetic you will find the NHS is good at giving you regular check-ups, but you won’t be referred to a consultant.  You will be referred to group therapy which may be excellent or deplorable.  It’s a lottery.   Don’t believe what the practice nurse tells you – even your doctor may be hazy on up to date diet advice – neither are given anything but a cursory training in nutrition.  My nurse told me that if I stopped eating bananas, I’d be okay.  Other common myths are don’t snack and don’t eat carbohydrate after 6.00pm.

SCIENCE TO THE RESCUE

Fortunately for me, when I was diagnosed, several years ago now, new research was just emerging that linked diabetes very clearly with being overweight. During the 50s people started to observe that the incidence of diabetes Type 2 significantly reduced during the two world wars, when food was short.

After the war Professor Hinsworth of UCL published data in The Lancet, that associated diabetes with rationing1.   That association has since been confirmed in several studies in mainland Europe and in the pacific. 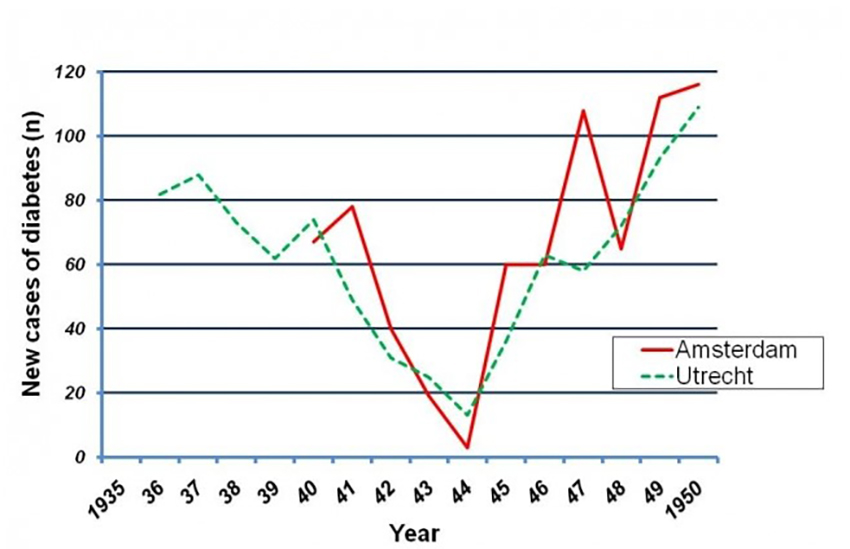 From a study of the Dutch Hunger Winter of 19443

Richard Wilkinson, professor of social epidemiology at Sussex University was one of the first modern researchers to point out how rationing seemed to be linked to better health.

From 1911 to 1921 and again from 1940 to 1951, life expectancy increased by between six and seven years – more than double the rise in other decades. In the 40s, deaths from many causes, including heart disease, diabetes, flu and pneumonia, fell significantly. Full employment, higher earnings, more equality and social cohesion all played a part in this dramatic health improvement. The wartime diet was clearly another factor.

But it is really important to stress that these studies dont imply that it is essential to cut out sugar (which was only one item rationed).  Nor is it a licence to starve yourself.  The people in the Dutch famine during the war, which lasted for a few months over the course of one winter, were scarred for life.  And we have now discovered that their children and even their grandchildren were effected, because of epigenetic changes to their DNA, brought on by starvation.

More recently researchers at Newcastle University have revived these studies and sought to glean a workable diet therapy from the phenomenon. The theory is that the islets of Langerhans in the pancreas, which distribute insulin, get clogged up with fat and stop functioning.  Reduce fat, especially visceral fat, and you can revive the function of the pancreas.

The approach is to lose weight and fast.  When I started dieting it was experimental.  My doctor had never heard of anyone curing themselves. We now know how to put people on short term low calorie (balanced) diets that will reduce their body fat sufficiently to kick start pancreatic function.  Professor Roy Taylor, the leader of the research team in Newcastle has been able to show how, as visceral fat reduces, so pancreatic function starts to work again.  Now large-scale studies are underway in Northumbria and Scotland to prove the efficacy.  But already many people, like me, are living much healthier lives because of his discovery4.

We now know that diet is very directly associated with diabetes type 2.  It is really quite simple, lose weight and with a bit of luck you may be able to reduce your reliance on diabetic drugs and reduce the symptoms.  You may be one of the lucky ones who caught it early and found they could dispense with drugs after only a few weeks of dieting.  I went on to lose almost 30kg, developing a very effective system not only to lose weight, but to keep the weight off forever.  After all, I had a personal investment in getting it right.  Since then I’ve discovered that losing weight protects me from many other diseases, such as cancer, heart disease and dementia.  I know that if every I were to regain that weight, I’d regain diabetes and increase my risk of contracting all sorts of  life-threatening diseases.  I don’t want that to happen.

There are still people out there banging on about low sugar or low carbohydrate diets for life.  Some are recommending fasting. Neither of these strategies are necessary or optimal.  It is simply a case of reducing body fat and then increasing your metabolic rate by exercising.  The fact of the matter is that once you’ve lost quite a bit of weight, it is much easier to enjoy exercise again.  So, don’t be lambasted by those who suggest that you need to starve yourself of carbohydrates in order to manage diabetes.  We all need glucose to live.   But I concur that not all carbohydrates are equal.  We don’t need loads of white bread, cakes, artificial sweeteners and Coca-Cola.  They will only make us fat.  But healthy carbohydrate, such as that found in wholemeal bread, cereals, legumes, fresh fruit, veg and milk all have their place in a long-term balanced diet.  The alternative to low carb is high fat, and while a little of everything is good for us, either too much fat or too much sugar will make us fat. It is the excess adipose tissue that’s the real culprit – not one individual food.